Film Review: Fantastic Beasts and Where to Find Them

Once upon a time, there lived an audience who got to see original films.

Treated to new excursions in foreign lands, and whisked away into the euphoria of the unknown, they knew not what these ‘franchises’ of which we speak, were. Yet here, in the world of the Disenfranchised they’re our bread and butter. Or so it would seem.

Fantastic Beasts and Where to Find Them is the first of five proposed films to be adapted from its 2001 J.K. Rowling novel namesake. Taking us back in to the wizarding world of Harry Potter, Fantastic Beasts introduces us to Newt Scamander (Eddie Redmayne), a scientist of sorts who’s on a global excursion to study and document magical creatures. Arriving in 1920s New York for a brief stopover, Newt has a chance encounter with a curious No-Maj (American for Muggle) named Jacob (Dan Fogler), which could spell the end of healthy relations between wizards and their non-magical counterparts.

Save for its nostalgic attraction, Fantastic Beasts has little to offer its matured Potter audience. Eddie Redmayne is perfect as the fumbling and somewhat eccentric Newt of course, but he’s lost in a film that can’t seem to find its point – perhaps relying on the fact there’s more movies to come. Fantastic Beasts lacks solid context for its busy frenetic display of creatures and concerned No-Maj’s. Watching the well-shot recreation of 1920s New York cinema-goers may be momentarily delightful, before wondering “wait, why’s all this happening?”

If box-office response is anything to go by though, studio bosses won’t mind a confused audience: Fantastic Beasts was number one on opening weekend in Australia and the US. The challenge for those bosses will be to recognise when their audiences’ goodwill toward extended franchises is exhausted, and hope it isn’t one film too soon.

Fantastic Beasts is a colourful (if not redundant) reminder of our intrigue into the supernatural – which here is represented rather darkly – but is yet to prove whether or not reopening the wizarding world will be worth it.

High point: Sharing in the bewilderment of No Maj Jacob as Newt introduces him to the beasts.

Low point: Seeing the loss of hope in the dark side of the supernatural. 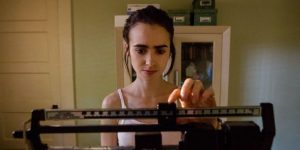 Review: To the Bone

Can we talk about anorexia without glorifying it? It isn’t the biggest question in To the Bone. Lily Collins and Keanu Reeves star in the Netflix original tackling taboo around…